The Devil You Know 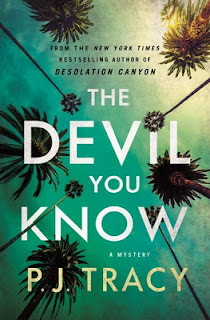 The Devil You Know by P. J. Tracy is a highly recommended procedural set in Los Angeles. There is a whole lot going on in this third installment of the series featuring  Detective Margaret (Maggie) Nolan series, following Deep into the Dark and Desolation Canyon.

From the opening, readers will know two bodies are going to be found at some point in the plot. Then we learn that a Disney actor, Evan Hobbes, is found dead after he had a fake video released portraying him in a devastatingly bad situation. He is found following a party given by Disney exec David Baum and his wife, Essie. Essie's brother, Seth Lehman, was Hobbes’ agent at Wodehouse International Talent, run by his boss Rebecca Wodehouse. Then David is found murdered. Maggie and her partner Al Crawford have to deal with self-important Hollywood egos  while pursuing their investigation.

There are a whole lot of characters in the narrative. Almost all of the characters are connected or interconnected in many ways and are almost universally odious. A whole cast of unlikable characters means there are plenty of suspects because you will suspect or want to suspect almost everyone is guilty. Secrets and bad behavior abound and Maggie must wade through all of it trying to find the killer. Maggie is the anchor and a likable character.

Although it is said that this can be read as a stand-alone, I feel that it might behoove readers to read the previous two novels to get a handle on the reoccurring characters and their traits. The cast of characters were almost overwhelming to keep track of at the beginning. This is all speculation because I haven't read the first two, but sorting everyone out did take some concentration and the background information may have been helpful.

The Devil You Know is a well written procedural. The short chapters keep the action moving along quickly and the plot is suspenseful and interesting. The writing in the opening was very descriptive, which seems to stand out in contrast to the other chapters as the plot continued. The complex characters add to the narrative as clues are dispersed along the way. even if you guess whodunit, the entertainment is worth the read.

Disclosure: My review copy was courtesy of Minotaur Books via NetGalley.
Posted by Lori L at 2:05 AM