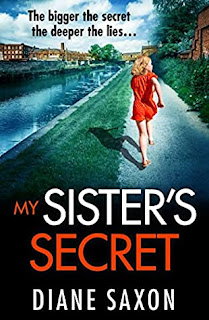 My Sister's Secret by Diane Saxon is a highly recommended psychological thriller.

Four sisters, Tess, Bobbi, Alexis, and Sarah, were born years apart and all very different adults, but they are still bonded together. The bond is over their childhood but also something awful that happened to one of the girls. Unknown to the others, another sister also experienced a trauma. They crossed paths with Gary Philpotts. One was molested and threatened while another was raped. Authorities were never contacted, but Philpotts was charged for another incident and they have kept track of him. When he is released on a technicality, the sisters call an emergency meeting for mutual support. Only one of them secretly takes things a bit further....

Saxon does an excellent job describing and establishing the background to her characters and bringing them to life. All the sisters were believable, fully realized and unique characters. Readers will have to pay attention to the sister's ages (and Bobbi's children) at the beginning to keep them all sorted out as the novel progresses.

The narrative in My Sister's Secret is told through the point-of-view of the sister's individually and also one of the sisters when she was a nine-year-old child and now as an adult. Her story is the beginning of the insight into what the sister's experienced and kept secrets concerning. There is an awful experience that bonded the sisters and kept them close.

Both the subject matter and the plot are emotionally charged. The novel is well-written and will immediately pull readers into the worlds of the sisters and their concerns. Once you start reading My Sister's Secret you will definitely be compelled to keep reading. There are a few incidences that require you to suspend disbelief, but you will gladly do so in order to find out what happens next. This is a very dark but entertaining novel that serves up a certain type of justice and it is up to the reader to decide if it is appropriate.

Disclosure: My review copy was courtesy of Boldwood Books via NetGalley.
Posted by Lori L at 11:54 AM