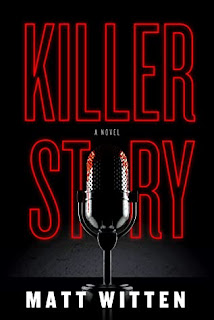 Killer Story by Matt Witten is a highly recommended mystery about a journalist searching for the truth behind a murder.

Petra Kovach, is a young reporter who has been laid off several times and is about to be let go again when she pitches a story to her editor. She claims to have sensational inside undisclosed information about the murder of Olivia (Livvy) Anderson. Petra was a counselor at a journalism camp Olivia attended when she was 14 and the two kept in touch. Olivia became a successful podcaster while at Harvard and was killed. The professor tried for the crime was acquitted, so the real killer was never found. When Petra ran into Olivia's brother, Eric, one night he intimated that he had knowledge that the police didn't know.

Although Petra didn't have any new information, she claims she does in order to keep her job. Her bravado over the claim of new material concerning the unsolved murder is now to be a series presented as both a podcast and in print. She desperately searches for new clues and ends up betraying confidences and her integrity. This lack of principles is rampant among the journalists. Is Petra really looking for justice for Olivia or is she more interested in advancing her career?

It is clear that Petra so desperately wants to succeed as a journalist that she will quickly set aside any professional ethics. It may present itself as a story about searching for justice, but it is really a story about how low Petra will go to get the next sensational story. This is what makes the story compelling, but it isn't really shocking. Despite journalist claiming they have standards, it is obvious that many would do the same thing Petra did, set principles and legalities aside to get a sensational story out that will result in more clicks, views, and downloads.

Due to her actions, Petra is an unlikable, flawed character. As the narrative unfolds, Petra actions reflect her mindset. She becomes more concerned with each sensational new revelation and the clicks it will get as she increasingly sets aside ethics while framing it all as "justice for Olivia" rather than the more truthful "career for Petra."

The twists and the direction of the investigation aren't surprising. What kept me immersed in the story was following Petra's increasingly competitive and the-ends-justify-the-means attitude. I kept wondering just how low she would go before she realized what she was doing, and how the ethics of all the journalists seemed to be tossed out the window for the clicks. And then, yeah, solving the murder mystery and learning who really killed Olivia.

Disclosure: My review copy was courtesy of Oceanview Publishing via NetGalley.
Posted by Lori L at 11:20 PM