Blood World by Chris Mooney is a highly recommended crime novel that takes place in the future. 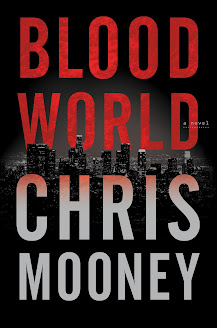 It was discovered that some people carry an enzyme in their blood that makes cells produce an incredible amount of energy, which in turn helps the carriers fight off disease. A transfusion of carrier blood may also reduce aging, cure disease, and increase the sex drive. Now carriers have to be on the lookout for those who may want to kidnap them for their blood. Kidnapped carriers may either be immediately killed for their blood or be held captive at blood farms where they are forced to give their blood which is then sold. Ellie Batista became an LAPD officer in hopes of getting a spot on the Blood squad to help fight the Blood Crimes that are taking place.

During an investigation, Ellie and her partner are ambushed at what appears to be a house that is somehow involved with the blood trade. As a result of the bloody ambush, Ellie is offered a position where she will take on a new identity and go undercover, infiltrating the blood world. Ellie is ready for whatever happens because, unknown to everyone, as a child she had her twin brother, who was a carrier, kidnapped.

The narrative alternates between Ellie (Faye Simpson when undercover) and Sebastian Kane. Sebastian is in charge of a huge undercover operation in the blood world. His blood transfusion product is named Pandora and is well-known to be the best. At the ambush Ellie was at, his stepson Paul was involved, and that is the beginning of sort of a blood turf war between the two. Paul has discovered a way to increase the potency of a carrier's blood and he has plans to take over. While Ellie/Faye is trying to uncover more information about the blood trade, Paul is out to kill Sebastian and take over or undermine his blood empire.

The tension is palpable in this crime novel and it will hold your attention from beginning to end. The crime/thriller part of the novel works very well. I was glued to the pages. The characters may not be completely likeable or relatable at all, but you will want to know what happens next. And the action keeps coming while the threats are mounting. What wasn't quite as well done was the world building, especially concerning the enzyme the carriers have and how it was discovered, how the blood trade evolved. As a hard science fiction fan, I wanted more information and kept expecting it to be provided, but, alas, the information slowly provided wasn't very detailed and I was left wanting more. I enjoy crime novels too, but if you are going to add a science fiction element, then use it. But, the whole undercover operation is so well done, and the action surprised me several times, so all in all Blood World is a winner.