My Lies, Your Lies

My Lies, Your Lies by Susan Lewis is a recommended novel of intrigue that morphs into a family drama. 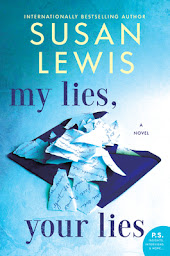 Joely is a ghost writer who assists other people in telling their story, so it is a surprise to her when she is hired by a well-known writer, Freda Donahue, to be a ghost writer for her. Freda apparently has a story she wants to tell to set the record straight and she hand-picked Joely to do the job. It is clear from the start that Freda is an odd, eccentric woman who has an arrogant, condescending attitude. The story she wants to have Joely write is set in 1968 and is about a fifteen-year-old girl who had an affair with her twenty-five-year old teacher. Joely wants to escape her home life right now anyway because it is in turmoil.

My Lies, Your Lies started off strong and once it got going it grabbed my attention. The tension was palpable and I was glued to the pages. Then something switched off in the writing and the novel morphed into a completely different story, one that was neither gripping nor compelling. There was a place in the novel where, if Lewis had changed her direction and came to a conclusion, I would have rated it five stars. Instead, she headed off in an insipid, unbelievable direction and lost my interest in the last 20% of the novel. The impact the novel could have had was lost in a fluffy ending. The writing was mostly good and the characters well-developed so I'm recommending it, with the warning that the ending will work for some readers and not for others.