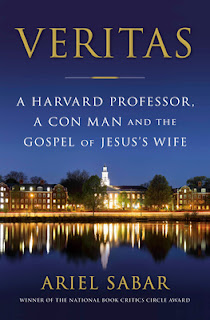 Veritas: A Harvard Professor, a Con Man and the Gospel of Jesus's Wife by Ariel Sabar is a very highly recommended true story of a religious forgery and a scandal.

The story starts in 2012 when Dr. Karen King, a Harvard Divinity School professor, announced at a conference the discovery of an ancient fragment of papyrus on which Jesus calls Mary Magdalene "my wife." If true, a married Jesus would change the 2,000 year history of Christianity. King titled her discovery "The Gospel of Jesus's Wife," which served to provoke Biblical scholars and threaten traditions. Debates over the small scrap of papyrus raged as its authenticity was brought into question. Author and journalist Ariel Sabar set out to investigate the mystery of where the manuscript originated. His search is a detective story in its own rights as he traced it back to rural Florida and an internet pornographer. This is the story of what happens when a scholar decides that the story she wants to believe is more important than the actual truth.

The account is in two parts. The first details how King came to learn about the manuscript, her background, and the events from her shocking announcement to her fall and retraction after carbon dating and an article by Sabar. The second half has the author becoming part of the narrative as he finds the owner of the forgery, Walter Fritz. He searches for and follows the provenance of the manuscript, uncovering the questionable authenticity as well as other irregularities in the experts King used. He also finds information that may point to at least part of the motivation behind King's original decision to look at the small scrap of papyrus. This is a well-researched and documented true life detective story about a forgery that fooled a scholar, but it also examines the motivations of all the people involved.

One central fact which emerged is that King allowed the social impact of what she wanted to believe was real blur her search for truth and authenticity. Even things she should have questioned or reserved judgement about were overlooked for the story she wanted to be true. "Her ideological commitments were choreographing her practice of history. The story came first; the dates managed after. The narrative before the evidence; the news conference before the scientific analysis; the interpretation before the authentication. Her rich sense of what Christianity might be - if only people had the right information - too often preceded the facts." This is a fascinating account of a forgery and scandal. It is lengthy and can be a slow read at times simply due to the amount of research, facts, and information Sabar has included in the account.

Disclosure: My review copy was courtesy of Knopf Doubleday.