Somewhere in the Dark

Somewhere in the Dark by R. J. Jacobs 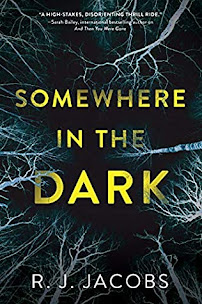 
Somewhere in the Dark by R. J. Jacobs is a highly recommended psychological thriller/mystery.

Jessie Duval's life is finally on the path to recovery. She is living in Nashville, has an apartment, sees a therapist she likes, and enjoys her prep job with a catering company. After a childhood of abuse and neglect, which included a year living in the dark in a locked closet, she is learning coping skills to overcome her issues. The one rule she must legally follow is to stay away from singers Owen and Shelly James. Jessie was obsessed with them for a reason and followed their concert tour for a year, but after therapy she understands what happened and has changed. Although she is still fragile, she is now doing well for herself.

Jessie just likes prep work, but her boss convinces her she will do a fine job serving at a graduation party after his help quits. Shelly James shows up at the party with Owen and their daughter, and Jessie tries to keep out of their sight. Subsequently, when the James's hire their catering company for a party, Jessie knows she should stay away, but she is finally talked into doing the job by a surprising source. After the party, when Shelly turns up dead, Jessie is a suspect, but there is a whole lot more going on than people realize and Jessie may have the key to who did it.

The narrative starts slowly as Jessie, her problems, and her background are introduced and explained. Since Jacobs is a psychologist, he delves into her trauma, background, thought processes, anxiety, and coping mechanisms resulting in Jessie being a sympathetic character that you will trust and feel supportive of her recovery. She is very observant and, although broken, she is in many ways also stronger than people realize. Jessie is a great character to build a story on because you want her to to be safe and continue on the path to wellness.

The novel is well-written, with several strengths and a few weaknesses. Obviously, the creation of the character of Jessie is a strength. She is a captivating character and she does carry most of the plot. Some of the supporting characters are not as fully realized, but it doesn't affect the plot negatively as the action starts and keeps moving. After the slow set up the plot takes off at a brisk pace once Jessie starts searching for answers. Everything quickly reaches a breakneck speed up to the twisty, surprising climax. The conclusion is uplifting and hopeful, which is a winning way to end the narrative.

Disclosure: My review copy was courtesy of Penguin Random House.
Posted by Lori L at 12:25 PM