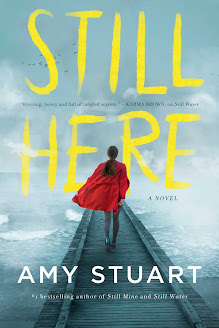 Still Here by Amy Stuart is the highly recommended psychological thriller and third book in the Still series.

Clare O'Dey (O'Kearney) is working with Detective Somers and looking for Malcolm. He has disappeared and no one knows where or why. Clare travels to the oceanside city of Lune Bay to look for clues as to Malcolm's whereabouts and that of his missing wife, Zoe Westman. Malcolm is a suspect in Zoe's disappearance, but it appears that Zoe's wealthy family might be more likely to have something to do with it. Clare begins to look into Zoe's family business and the murder of her father years ago. The entire community of Lune Bay seems to be hiding something. There are two young women who went missing from there, but no one seems concerned beyond Somers and the father of one woman. At the same time she is still hiding from her abusive husband Jason and is always wary he will find her.

This is one series that it would be beneficial to read the whole Still series in order: Still Mine, Still Water, and Still Here. I missed the first, read the second and now the third, and I have to admit I enjoyed Still Here more because I had read Still Water. I knew Clare, Somers and Malcolm and this time around I actually liked Clare much more as a character and felt she was well-developed. Of course, this could be because I had met her previously. Knowing background information made this an compelling thriller with a plot that stayed interesting from start to finish. It could be due to the fact that Clare is in danger this time, which ups the unease and nervousness while you read.

The plot is strong in Still Here. Clare is intuitively following clues she uncovers from a variety of people she encounters and even finds a few allies in her investigation. There is a lot of tension because we know in the beginning that Clare is going to be hurt and in a desperate situation. Then the narrative jumps back to four days earlier and follows the action leading up to the incident described in the opening. There are so many secrets and half-truths being shared with Clare and she needs to untangle what is true and where that clue leads. The resolution is very satisfying this time and I was glad I read this third novel in the series.

Disclosure: My review copy was courtesy of Simon & Schuster.
Posted by Lori L at 2:59 PM