Do Her No Harm

Do Her No Harm by Naomi Joy is a highly recommended psychological thriller. 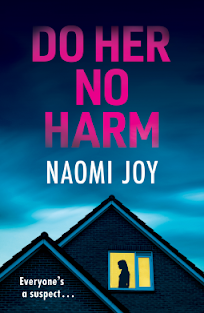 One night five years earlier Tabitha (Tabby) Rice disappeared without a trace. She's presumed murdered, but there are no clues as to who could be responsible, beyond her husband, Rick Priestley. Rick claimed to be innocent and there is no proof he did anything. Annabella (Bella) was Tabby's best friend and she knows there is more to the story. She's been looking into Tabby's past trying to uncover proof that Rick did something, but to no avail. Bella knows that Tabby suspected Rick was having an affair and she is determined to dig up dirt on him. When podcaster Kay Robero talks to her, the two begin to work together.

The narrative jumps around in time from the present day, to 5 years earlier, before Tabitha disappeared, and even back 20 years when Rick met Tabitha. The story is told through Tabby, Bella, and Rick's point-of-view. There are also bits of Kay's true crime podcasts. Once the narrative gets moving, it quickly becomes clear that there is more going on than is being revealed and readers will be leery to trust any of the characters. The plot is a little slow paced, but that does serve to build up suspense that something is going to happen and some twist must be in sight. Patience with the pace will be rewarded in the end, but I'd be untruthful if I said it was gripping or a thrill-ride until near the very end of the book.

While the plot through most of the novel is pedestrian, the characters make the story interesting. These are all flawed and, well, odd people who are not likeable or trustworthy. They all have secrets and as with any good thriller it is the secrets and the feeling that all is not as it seems that will keep you reading. You do have to get to the last fifth of the novel before things really become tense and nail-biting leading up to the conclusion. What was a solid 3 star rating jumped to 4.

Disclosure: My review copy was courtesy of Head of Zeus.
Posted by Lori L at 1:29 PM