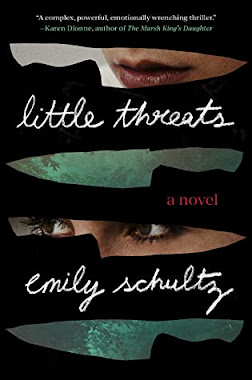 
Little Threats by Emily Schultz is a highly recommended whodunit and a psychological study of a family.

In the summer of 1993, privileged sixteen-year-old twin sisters Kennedy and Carter Wynn and their friend Haley Kimberson are pushing boundaries. Kennedy and Haley decide to party one night with twenty-one year old Berk Butler. Later that night Kennedy wakes up in the woods, looks for Haley, and finds her dead, murdered. Kennedy can't remember a thing from that night. Suspicions fall on her and Berk, but his testimony places guilt on her and she ends up just pleading guilty.

Now it is fifteen years later and Kennedy is being released. The world has moved on. Carter has grown distance, their father, Gerry, is trying too hard to protect family bonds and forget the past. Laine, her mother, died from cancer when Kennedy was in prison. Kennedy's return to the family home is bringing the case back to the surface and a true crime show is investigating the case to see if they can uncover who really killed Haley.

The story is told through three points-of-view: Kennedy, Carter, and Haley's brother, Everett. Carter and Everett have started a relationship, which is potentially fraught with trouble for both families and has questions arising about what really happened in 1993. There are a lot of questions that need to be answered because it seems clear that Kennedy's guilt is hardly a given. The secrets and hidden guilt of various people over a myriad of actions are slowly revealed in the narrative. As you read, guilt will jump from one character to another as a new secret is exposed or something else is remembered.

The story does start out slowly and as the plot unfolds, it is at a measured pace until the ending. The writing is good, but you need the patience to slowly follow the backstory of the individuals involved and their psychological state of mind. This is a portrait of two families in crisis, the Wynns and the Kimbersons, and how the murder affected them. Everyone has guilt over something and there is more than one suspect. The ending is a shocker, but you will recognize the clues and small details leading toward the guilty party.


Disclosure: My review copy was courtesy of Penguin Random House.
Posted by Lori L at 1:17 PM