After All I've Done 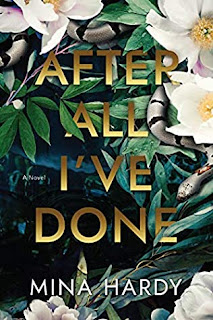 After All I've Done by Mina Hardy is a highly recommended domestic psychological thriller.

Diana Sparrow was in an accident five months ago that left her missing two months of her memory. What she does know now is that her husband Jonathan is having an affair with her best friend, Valerie. Jonathan's mother, Harriett Richmond, lives in a guest and comes over daily to help Diana. Diana is slowly recovering but is becoming tired and annoyed by Harriett's constant presence. She is also having nightmares about the accident and burying something. Divorcing Jonathan isn't an option because of their prenup. Diana seems to be on the road to recovery, but she keeps having setbacks.  Her sessions with her psychiatrist don't seem to be helping either.

Chapters in the first part of After All I've Done alternate between narration by Diana and Valerie; a third narrator is added after this providing a new twist to the story. All of the characters in this novel are unreliable narrators. Diana says she doesn't remember, Val talks of a scheme, Jonathan is a sleazeball, and Harriett is the worst of them all. It's clear everyone is lying about something and odd occurrences seem to be multiplying. Most normal people would start the confrontations, but then everyone's sanity - and angle - is also at play here.

All the characters are disagreeable - every single one. In a novel like this I'd normally like at least one person to trust and that's purposefully not happening here. The plot does get more interesting once the third narrator is added along with a whole other side to the plot. Hardy keeps the action moving quickly, though, which takes some of the pressure off a lot of character development and focuses it all on the current situation involving all these characters.

You'll likely know where this one is going long before the denouement, but it is a twisty entertaining ride to get there. The writing is good, the plot is engaging, and while you'll dislike all the characters, you'll keep reading simply to find out if what you've guessed is happening is in fact happening. (You're guessing correctly. It follows a tried and true formula.) Hardy throws plenty of surprises and action into the mix of this domestic thriller to keep it entertaining and suspenseful until you reach the conclusion you saw coming.

Disclosure: My review copy was courtesy of Crooked Lane Books