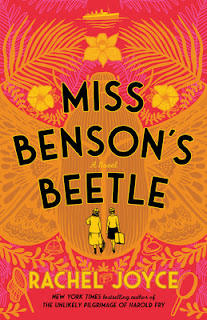 As a ten-year-old in 1914, Margery Benson was shown a book of fantastical creatures by her father and she was immediately taken with the golden beetle of New Caledonia, an island in the South Pacific. Thirty-six years later, in 1950, Margery is a teacher of domestic science and has reached a breaking point. Forfeiting her job, she grabs a new pair of boots belonging to a colleague and runs out of the building. Margery has decided she must go on the expedition that she has dreamed about for years. She is going to travel from Britain to New Caledonia to find the golden beetle. She sells almost everything she owns and places an ad in the newspaper for an assistant who speaks French to accompany her, but ends up with the one woman she wasn't even going to interview: Enid Pretty. The two women, who are complete opposites, board the RMS Orion headed to Australia and then on to New Caledonia. Unknown to them, however, they are being followed by a delusional man who thinks he must head Miss Benson's expedition.

The golden beetle may not even exist, but the two women take on an extraordinary adventure, face one crisis and trial after another, and, ultimately, become friends. This is a wonderful, captivating, quirky novel, with all the warm fuzzies, that has incidents of sadness, danger, uncertainty, endurance, and comedy, but fundamentally it showcases the important life-changing power of friendship. The characters absolutely shine in this novel and are fully realized with an acumen and depth that makes them feel real. Ultimately, they are portrayed as complex women, with both strengths and weaknesses, as they experience trials and growth in their characters. It is the characters that make this novel, although the expedition is interesting and you will keep reading for both the plot and the characters.

The writing is admirable and splendidly captures both the characters and the narrative. I enjoyed the physical journey the characters undertake as much as the personal growth they exhibit. The plot does have a few incidents that stretch believability but, as with most adventure novels, you can easily set them aside and just enjoy the action in the narrative. This is simply a beautifully written, uplifting story. Even with the dark moments and the trials the two go through, Miss Benson's Beetle is an accomplished novel to read for escapism, especially during a trying time. It must be said that the final scene in the novel was absolutely perfect.

Disclosure: My review copy was courtesy of Random House.
Posted by Lori L at 2:48 PM