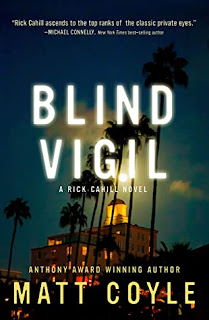 Blind Vigil by Matt Coyle is a very highly recommended classic PI novel and the seventh in the Rick Cahill series.

Private investigator Rick Cahill was blinded by a gunshot wound to the face nine months ago while on his last case (Lost Tomorrows, #6 in the series). Now he is trying to learn to live without sight at his home in San Diego and, perhaps, find a new direction to his life. When his friend and sometimes partner Moira MacFarlane asks for his help on a case, he acquiesces. Apparently Moira is interviewing Rick's estranged friend, Turk Moldoon, and she wants Rick to sit in on her interview of Turk about the case. She is sure Rick will be able to tell if Turk is telling her the truth or not, something that is important to her after a previous case turned out disastrously. Turk wants Moira to follow his girlfriend, Shay, to find out if she is having an affair. Rick is sure Turk is telling the truth, so Moira takes on the case. Then Shay is killed, Turk is the main suspect, Moira is furious with Rick, and Rick is determined to discover the truth behind Shay's murder and defend his friend. And who is the man Rick keeps smelling as he follows Rick?

First, you can jump into Blind Vigil without having read the previous novels. I have read the previous novel, Lost Tomorrows, but I'm sure anyone could read Blind Vigil as a stand-alone. The writing is straightforward, the investigation is logical, and the pace is quick. This really is an entertaining, engaging, fast read that will also holding your attention from start to finish. If you like classic noir PI novels, you really need to check out this series.

Personally, I like the way Coyle portrays his hard boiled detective in this series and Rick Cahill is a great character. Rick is compelled to discover the truth no matter the cost and with his current lack of sight this compulsion may put him in danger. He may also be putting any chance of personal happiness at risk with his girlfriend, Leah, as they try to make a long distance romance work. As he investigates the case on his own with some help from Moira due to his impairment, he makes very logical connections and observations, putting the pieces together while trying to prove Turk is not guilty.

Disclosure: My review copy was courtesy of Oceanview Publishing.
Posted by Lori L at 4:09 PM