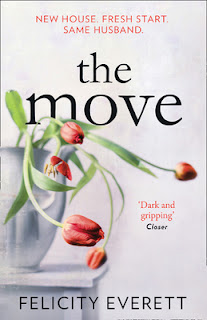 
The Move by Felicity Everett is a recommended domestic drama.

Nick and Karen have bought a house in the country that Nick has been fixing up for Karen as she recovers from an unknown illness. (It is assumed that it was a mental breakdown.) Nick was having an affair, which is supposed to be over now, and this move is to signify a new start and putting the past behind them. She meets the new neighbors, while missing her old friends, and is trying to make this new start successful. It seems that Nick, though, may have plans of his own and Karen is not sure she can trust him as odd things start to happen.

This novel is much slower paced than I was expecting and is really a story about a woman who doesn't trust her husband. The villagers they meet are a diverse bunch and they are depicted as such. The house has an odd vibe for Karen, but we don't know if it is her projecting her feelings. Is Nick sabotaging her?  Karen is a potter and Nick has built her a studio in the garden, but still she has doubts. Does Nick have plans she doesn't know about or is he truly re-devoting himself to their marriage? The writing does a good job building up suspense and highlighting Karen's paranoia. The starting scene sets up the plot for ensuing drama. Then the novel had some eerie scenes, where you were scared for Karen's safety, but nothing confirmed. I found it difficult to connect with the characters or really feel engaged in the plot. There is a final twist in the tale, but I found the final denouement a bit disappointing. The Move is okay, but don't expect a thriller.


Disclosure: My review copy was courtesy of HarperCollins
Posted by Lori L at 2:25 PM