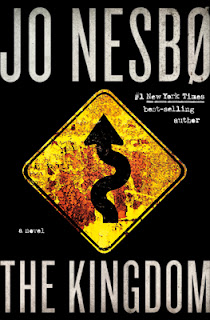 The Kingdom by Jo Nesbo is a very highly recommended twisty, dark, standalone thriller. Once you start it, this one is un-put-down-able.

As they were growing up Roy Opgard has always been there to look after and defend his younger brother, Carl. Roy is a mechanic who currently runs a service station, with hopes to own his own station someday. Carl went off to college in the USA and then went to work in Canada where he had great success. Carl is now coming back to Os, the remote Norwegian village where he grew up with Roy. He arrives with a wife, Shannon Alleyne, and plans to build a resort and spa on the mountain that the brother's jointly own. These two brothers have a dark past and are survivors.

This is an absolutely riveting thriller and Nesbo's writing will expertly play on all your emotions with his narrative slight of hand. As old secrets are slowly exposed, it also becomes clear that the brothers need to make more plans. Make no mistake that it is also an unsettling, disturbing novel where violence, suspicious accidents, and abuse are prevalent. The tension and trepidation continues to grow and spread out as each part of the narrative unfolds.

There are several mysteries hidden in the novel and the tale of each one will eventually be told. Since the setting is a small town, everyone's secrets and history often come back to light. Os seems a small, insular,  provincial place where past and present actions are always noted and remembered. I am in awe of how carefully Nesbo plotted this novel and allowed Roy, the narrator tell the story. Just when I thought one thing was true, I'd learn a few chapters later that it was another thing altogether.

Roy, as mentioned, narrates the novel, tells the stories, and explains his complex relationship to his brother, Carl. Roy is a complicated character and since he is the rather reticent narrator we very slowly learn more about him, his past, and the secrets he holds. He also has a great capacity for violence, but he is also logical to a fault. Towns people consider his a decent man, although Roy might disagree.

After a slow but steady plot advancement throughout the whole novel, the final denouement is shocking, surprising, and unforeseen. Dark, disturbing, and utterly engrossing, I was seized by the compelling, intricate plot and held captive until the end. This is a contender for my favorite books of the year.

Disclosure: My review copy was courtesy of Knopf Doubleday .
Posted by Lori L at 12:16 PM