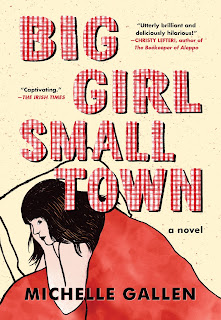 Majella is a 27 year-old woman on the autism spectrum who lives in a small village in Northern Ireland that is still experiencing the effects of the Troubles. Majella keeps a running list of what she likes (a short list) and dislikes (a much longer list). Mostly she dislikes other people. She spends her days taking care of her needy, alcoholic mother, Nuala, and works at Salt and Battered, the local fish and chips shop. She has regular customers who you can mark the time by their appearance and the job is a known routine. We know her father fell into a depression after the death of his brother Bobby and left Majella and Nuala years ago. The novel starts after the death of her grandmother a result of her being beaten in her home.

Big Girl, Small Town follows Majella's daily routine over a week. It is all very routine, mundane, and, well, boring. We hear the same conversations, the same questions repeatedly throughout the novel. The chapters are headed by items off Majella's list. Interspersed into the daily routine are occasional a new occurrence, an emotional memory, or a change in the routine, otherwise it is the same routine and a lot of details about her personally. There is character development, but due to Majella's personality, it feels rather basic. Her life experience is insular, restricted to her routine, enabling her mother's alcoholism, her basic wants, and her list.

Some of the dialogue is written phonetically, which at the beginning can take a while to parse. The flow of the writing feel already has a choppy and awkward feel, so the phonetically written parts don't help. This, added to the monotony of Majella's daily routine and the repetition can make it a struggle to continue to read. I kept at it because there have been so many good things said about this debut novel. I was waiting for the emotional payoff or a big reveal or twist, but the ending, although hopeful, doesn't provide quite what I was hoping to see. Additionally, the lack of closure over several major events in the novel left me disappointed. In the final assessment, I'm recommending the novel based on my experience, but I understand that other readers might connect with it more that I did.

Disclosure: My review copy was courtesy of Algonquin Books of Chapel Hill.