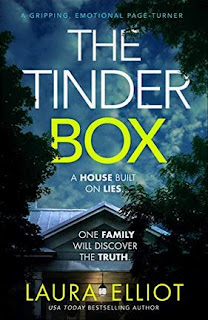 The Tinderbox by Laura Elliot is a recommended psychological thriller.

Sophy and Luke's marriage is over due to his gambling problem. The two have separated and Luke has went to a treatment center. Sophie has sold her business and is selling their house in order to pay off his debts. In order to provide a home for her two daughters, 14 year-old Isobel and younger daughter Julie, Sophie has accepted the position as a live-in nurse for Jack Hyland. Jack was horrible burned and disfigured in a fire and will need help and assistance in his recovery. Sophie and her daughters will be living on the main floor of his home, Hyland Hall. When they arrive, the three are shocked to see the home is is such disrepair, but Isobel is the only one openly complaining. When Jack's nephew, Victor, who lives next door shows up, it becomes clear that he wasn't told about Sophy's job and that Jack and Victor are not as close as Victor claims. Victor, however, sets out to charm Sophy and the girls.

The narrative unfolds in alternating chapters through the point of view of Sophie or Isobel. We become well acquainted with these two characters and their thoughts. Sophy feels that this position is a life saver as it provides a home for her and the girls. Isobel calls the upstairs the Fear Zone and finds the whole house creepy. She really starts out as a rather immature, bratty character, but you know from the opening of the novel that a teenage girl will be calling the Garda (police in Ireland) to say her life is in danger, so you know something is going to go terribly wrong. The pace starts out slow after this opening hook but eventually picks up later in the novel.

The suspense is in following the action to reach the point where the phone call is made. The main problem is that the whole plot is so terribly predictable. It partially follows a sort of Gothic plot outline, where there are unknown threatening elements, a crumbling ancestral home, a sequestered disfigured owner, a charming relative, and an ominous sense of foreboding danger. It doesn't help that the younger daughter, Julie, is attached to a child-size mannequin, treats it like a real person, and is trying to practice ventriloquism with her. Victor seems smarmy and untrustworthy from the start, making you doubt Sophie's intelligence when she responds to his advances. Yes, The Tinderbox is worth reading, but I knew where it was going almost right from the start so there wasn't a whole lot of suspense for me.


Disclosure: My review copy was courtesy of Bookouture
Posted by Lori L at 2:18 PM