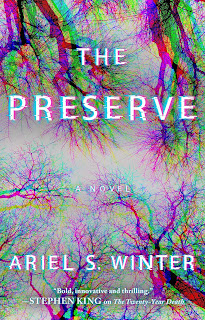 The Preserve by Ariel S. Winter is a recommended procedural set in a science fiction future controlled by robots.

Robots now control the world after the human population was almost annihilated by a plague. In this future world the AI rulers have opened a series of preserves, areas where people can live and rebuild their society and population. When the first murder occurs on the SoCar Preserve in South Carolina, Jesse Laughton, the Chief of Police in SoCar, is assigned to investigate the case.  At the same time a series of robots have turned up dead from indulging in sims, which are illegal programs that are akin to drugs for robots. The murdered man was Carl Smythe, who turns out to be a hacker who wrote and sold sims. It's a tricky situation. It looks like the murders  are related and could be used as a reason for the robots to close the preserves. Jesse's former partner from the Baltimore PD, a robot named Kir, comes to assist Jesse with the case.

This is essentially a procedural. If I look at it as simply a procedural and murder mystery, it is a satisfying read, but if I allow any of my sci-fi expectations to trickle in and expect more descriptions and background information it becomes a lesser novel. I chose to read it as a procedural in an interesting setting. The world building is rudimentary. The futuristic setting, with robots the controlling class who have allowed the setting up preserves for humans, is not so incidentally suppose to resemble any of a number of times the ruling group has set up an area, district, ghetto, camp, etc. to segregate another group. The groups of robots actually simply resemble humans in their prejudices, attitudes, etc. I guess I'd like a society run by robots to resemble not feuding human groups, but a more logical unemotional fact based system.

It is odd, but Kir, the robot partner of Jesse, is the most likeable character in the book. Jesse is not a character that you will connect with of feel a lot of sympathy for. He has debilitating headaches throughout the novel and they are almost mentioned too frequently. I am assuming they are migraines, but that is never openly said. I kept waiting for some explanation behind the continuous mention of them but any commentary about the cause for these headaches is never broached. The problem is that he repeatedly mentions that the headaches are interfering with his ability to do the investigation.


Disclosure: My review copy was courtesy of Atria/Emily Bestler Books.
Posted by Lori L at 10:59 AM