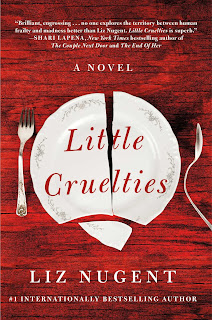 At the opening of the novel two unnamed brothers are attending the funeral of the third brother. Then Little Cruelties delves into the lives of the three Irish brothers, William, Brian, and Luke Drumm. The brothers were all born a year apart into a home where their mother, a narcissistic actress and singer, pitted the brother's against each other for her attention while their father tried to be fair.  The home that was full of turmoil as the boys fought for their mother's indifferent affection, but she had her favorite. The brother's themselves played cruel games against each other and always tried to justify their side.

The novel unfolds in four parts and is narrated by the brothers, starting with the oldest, Will, followed by Brian and ending with Luke. Their chapters/stories jumped around in time during their sections where we hear them talk about their childhood and past leading up to their current lives. In the final fourth part of the novel you hear from all three brothers. Will is a film producer who is arrogant, self-centered, immoral, and a misogynist. Brian is self-centered, insecure, ruthless, and is only out for himself. Luke becomes a wildly successful pop star, but struggles with his self esteem, addiction and mental health issues. Each brother tells their story, their shared family history, but through their own point-of-view and perspective. The difference in the way they view the same events is startling and disturbing.

It becomes quite obvious that the brother's are all unreliable narrators. Their accounts are all riveting, if only because they highlight how absolutely reprehensible the brothers are, especially Will and Brian. Luke's behavior is also wretched, but he is battling addicted and mental illness so he does get a pass in some ways. There is nothing positive in any of their interaction with each other because none of the brothers have empathy or truly care for the other two.

The narrative is engrossing, if only because you know a disaster is looming ahead and something in the brother's lives must explain what will happen in the future. But.. oh my are these unlikable characters, start to finish. I also will admit I had an adverse reaction to the brother's stories jumping around in time, back and forth over the years. Chapters are dated, so you know where you are in time, but I think I would have preferred their stories told in a linear fashion. This is a dark, bleak dysfunctional family drama that will hold your attention.

Disclosure: My review copy was courtesy of Gallery/Scout Press
Posted by Lori L at 1:12 PM