Out of Her Mind 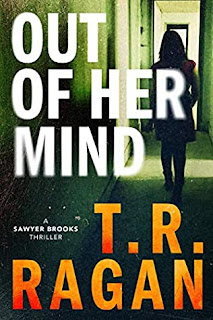 Out of Her Mind by T.R. Ragan is the highly recommended second novel featuring crime reporter Sawyer Brooks.

When the bones of a young girl are found in Sacramento’s Land Park Sawyer is on the story for the Sacramento Independent and begins looking into all the missing girls from the area. Then twelve-year-old Riley Addison disappears and Sawyer is certain that there may be a serial kidnapper/killer of young girls working in the area. Sawyer obsessively pursues any and all leads, certain that she will uncover the psychopath responsible. Her sister Aria begins to help in the investigation. Sawyer has also been assigned the case of the Black Wigs, a group of vigilante women who have been operating in the area and taking revenge on the men who attacked them. They were The Crew in the first book and unknown to Sawyer, her sister Harper is a member of the group. The three sisters, Harper, Aria, and Sawyer, are survivors of a horrific childhood as covered in the first book, Don't Make a Sound.

Out of Her Mind follows two different story lines. We have Sawyer and her investigation and Harper and her group of vigilantes. The writing is good and the action moves quickly. You will definitely want to know what happens and see a resolution to both story lines. Alas, you will get your wish for one, but not the other, which is likely because book #3 is due out in 2021. I did enjoy reading it after I set aside a few of my feelings over the subject matter in both narrative threads. The dialogue is a little stilted and the investigation felt routine, even when new information is discovered.  The characters are developed, but perhaps not as well as I would like to see, but that could be because I didn't read the first novel. It would be nice, perhaps, to have one or two main female characters who are not emotionally damaged.

This is a dark investigative thriller and the subject matter is disturbing in both story lines. That is not to imply that child abductions, abuse, rape, and violence don't happen, but perhaps this isn't a great year for such a bleak, disturbing drama. I didn't read the first novel in the series, and although some of the background information was recapped here, it still felt as if I was missing part of the story. However, this novel felt so ominous that I'm not sure if I want to peruse the first one, or at least not right now.

Disclosure: My review copy was courtesy of Thomas & Mercer.