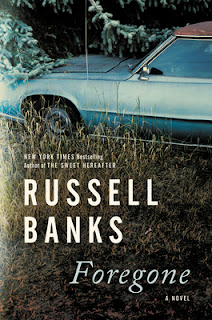 Foregone by Russell Banks is a highly recommended novel where a dying man shares memories from the early part of his life.

"Except for his memories, all living traces of his past, all the witnesses and evidence, have been erased by years of betrayal, abandonment, divorce, annulment, flight, and exile, eaten by time the way his body is being eaten by cancer."

Canadian American Leonard Fife is dying from cancer in Montreal. Now in his late seventies, he fled American and went to Canada many years earlier to avoid serving in Vietnam. He became a lauded documentary filmmaker in Canada. Now one of his former students, Malcolm MacLeod, is going to film Fife in a last interview about his famous films and how they were made. Fife has another plan. He is going to confess all his secrets and tell the real story of his life to the camera, while speaking to his wife, Emma. In a room of his apartment prepared for the interview, Fife sits under a focused light in his wheelchair while on a morphine drip with his nurse nearby.

Rather than answering questions posed to him by Malcolm, he insists his wife Emma be present so he can confess the true story of his life before they met. "[H]e’s telling his tale to his wife, Emma, because he wants to be known by her, the one person who has said many times over that she loves him for who he is, regardless of who he is. Perhaps most importantly, for the same reason, he’s telling it to himself- because before he dies he wants to be known to himself, regardless of who he is." Then Fife begins his story before he cam to Canada, when he was married, had a son, and wanted to be an author.

As Fife shares his story in the narrative it becomes clear that his memories may not be quite as coherent or cohesive as he thinks they are to his audience and readers will ultimately wonder what memories are just in his mind and what he is actually sharing. At the beginning the memories Fife shares seem realistic and trustworthy to the reader, through Fife's point-of-view, but then his memories begin to flicker to other events at different times and the realism of his recollections is not so straightforward. Fife is dying. We know this from the start and Fife knows that death is imminent. The thoughts in his head that we learn through the confession he wants to share make him a sympathetic character. As the narrative continues it becomes clear that that his illness and medication may result in the fact that Fife is an unreliable narrator.

This is a compelling story of a dying man sharing his memories. In between his story are interjections from his wife, nurse and others in the room. Their discussions make is clear that what they are hearing is not necessarily what we are reading. Can our memories of our past be trusted or are we our best editors? This is a character study of a man that may not be entirely trustworthy, but these are the stories he wanted to share before he died.


Disclosure: My review copy was courtesy of HarperCollins.
Posted by Lori L at 2:22 PM