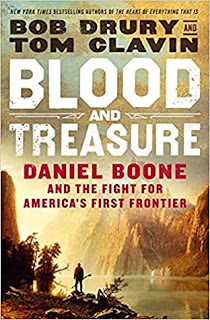 Blood and Treasure: Daniel Boone and the Fight for America's First Frontier by Bob Drury and Tom Clavin is a highly recommended account of the life of the legendary Daniel Boone.

Drury and Clavin present a detailed and well written narrative that is both a history of the times and a biography of Daniel Boone. This was a different time and place from the world we know today. It is the mid-eighteenth century in Colonial America. There are wars between the French, English, and Native tribes. All of this affected the lives of settlers, including the Boone family. This history focuses on the settlement of North America's first frontier and the Boone families migration from New England to settle the Carolinas and across the Appalachians to Kentucky.

It is clearly presented why Daniel Boone is such a legendary, larger-than-life, amazing historical figure. This is a well-written, accurate, well-researched, and unbiased account that is placed firmly in the context of the times, so it can be violent. It is told through the people who were there, experiencing the events depicted. Once the narrative starts, it is full of fast-paced, non-stop action. Drury and Clavin include footnotes to document the chronicle of events in Boone's life and times. The narrative covers a lot of territory, covering areas ranging from Pennsylvania, Virginia, North Carolina, Kentucky, Florida, and Illinois.


Disclosure: My review copy was courtesy of St. Martin's Publishing Group in exchange for my honest opinion.
Posted by Lori L at 3:47 PM