Under the Wave at Waimea 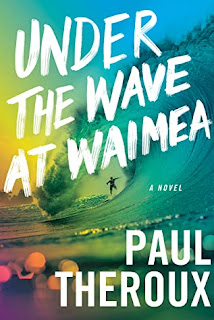 Under the Wave at Waimea by Paul Theroux is a highly recommended novel, especially for the right reader, of aging, mortality, but, most importantly, big-wave surfing.

Joe Sharkey is a legendary big-wave surfer who is now in his sixties and past his prime. Although there are some new, young surfers who realize who he is and recall his many incredible feats on the surfing circuit around the world, increasingly more of them don't recognize Sharkey. Sharkey still checks out the wave forecast and tries to surf everyday. He seemingly has an ideal life now. He is comfortable. He is living with a much younger woman, Olive, a nurse from England. But when Sharkey accidentally hits and kills a homeless man on a bicycle when driving home from a bar, he suddenly begins to question his mortality and begins repeating the many stories of his life to Olive. She begins the process and encourages him to uncover the identity of the victim which will hopefully give him closure.

The narrative also jumps back in time, to Sharkey's childhood, his family, and his start in surfing, as well as the bullying he experienced. Then it covers his surfing life. Basically, this is an in depth character study of a man who becomes a competitive surfer and follows his life, as he remembers it, in his search for the ultimate wave. This is about Joe Sharkey, and it is a ponderous novel. There is a whole lot of surfing in Under the Wave at Waimea, which is to be expected, and also a plethora of Hawaiian vocabulary, which can be frustrating without the context to always understand what is being said. There are also passages of brilliant character insight along with vivid descriptions.

The search for the identity and information about the man he killed, Max, does expand the focus of the novel and gives Sharkey a focus beyond his surfing stories. It is this search that sets his own mortality before him and provides a new dimension to his character. In the end, however, this is a well written character study of one man that suffers a bit from it's length and could use a bit of editing. In the parts that are successful, it is amazing, but there are whole sections that could use some editing. It also requires a higher degree of interest and appreciation of surfing than I expected. Finally, Olive could have used more character development as she was an intriguing woman.

Disclosure: My review copy was courtesy of HMH Books in exchange for my honest opinion.
Posted by Lori L at 2:05 PM