Mother May I by Joshilyn Jackson
4/6/21; 336 pages
HarperCollins 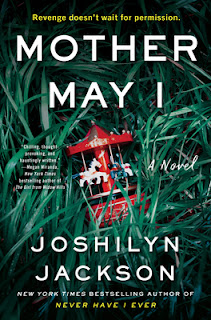 Mother May I by Joshilyn Jackson is a very highly recommended, heart-stopping domestic thriller. This is sure to be on my list of top novels of 2021.

Bree Cabbat wakes up very early one when she sees a witch looking into her bedroom window. Of course it couldn't really have been a witch she assures her husband of sixteen years, Trey, and then their day starts early when baby Robert wakes up. Bree, who grew up poor in rural Georgia, but went to college for her degree in theater, is living a luxurious life now. Trey is a from a powerful, wealthy family and is a partner at his law firm. His wealth allows her to care for their three children, Anna-Claire, 13, Peyton, 12, and Robert, the baby. The girls attend a private school in Atlanta.

Later that day, after helping Trey pack for an out of town trip, Bree is at her girl's school bringing snacks for the rehearsal of a school musical Anna-Claire has a lead role in when she sees the old woman, the witch again, in the parking lot by her car. Bree has an ominous feeling, but shakes it off. Marshall Chase was there with snacks also. He was the husband of Bree's best friend, Betsy, who died five years earlier and Bree grew up with both of them. Marshall joined her and Peyton up in the balcony to watch the rehearsal. Robert was sleeping in his carrier by Peyton, who was engrossed in a book. Then, when Bree turned to check on Robert, he was gone. A note was left warning her that she was being watched. If she wants her baby back she needs to follow the instructions she will find at her house and not call the police. She makes sure her girls are safe and protected while she follows the instructions left at her house. The kidnapper isn't asking for money. Bree has to do one task, which results in the inconceivable, but she needs to save her baby.

What follows is a spine-tingling, heart-stopping, devastating race to follow instructions coming from the old woman in hopes of safely recovering baby Robert. Marshall, who was a police detective, is now an investigator at Trey’s firm and Bree confesses to him what is happening. The two along with help from a lawyer and Marshall's contacts must scramble to try and discover what the kidnapper wants before she kills Robert. It is clearly a personal grudge, but the event that provoked the kidnapping is unknown. Marshall and Bree must scramble to try and discover some information that will help them find Robert.

The marathon to discover the identity of the kidnapper and try and uncover something that can help them is full of twists and disturbing discoveries. At the heart of the action are questions that any mother could ask: How far would you go to protect your child? Your life? Your family? And the action and discoveries keep ramping up the tension, the questions, the lies, while expanding the search for the truth to places far from the expected and showcasing how bad decisions in the past can come back to haunt you.

The characters are all wonderfully developed and felt like real people. You will have great empathy for Bree and feel the anguish and pain as she struggles to try and get Robert back. Marshall is also a very sympathetic character, as is his deceased wife and Bree's best friend, Betsy. Trey is developed through Bree's eyes, and as the novel unfolds. Even the teens rang true to character and were realistically portrayed.

The writing is excellent, exactly what I have come to expect from a Jackson novel. The pacing is perfect and incrementally ramps up toward a heart-stopping ending. The premise of the plot rings true, as does the secrets that are exposed. (If I had one regret it was that I started this novel when I had to work the next day and could not finish it in one sitting. I spent a whole day wanting to get back to reading.) Every new novel by Jackson becomes my new favorite and Mother May I joins all her other novels that I have received my highest rating.

Disclosure: My review copy was courtesy of HarperCollins in exchange for my honest opinion.
Posted by Lori L at 1:58 PM