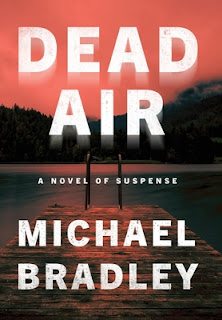 Dead Air by Michael Bradley is a recommended thriller featuring a secret past, a stalker and revenge.

Kaitlyn Ashe is a radio personality in Philadelphia with a popular show and a devoted boyfriend. She is finally settling down and feels comfortable enough to buy a house. Unknown to those who know her, she has been running from a secret since her teens, but now it seems someone who knows her past is stalking her and taunting her with notes referencing her secret past. The anonymous letters, consisting of words cut out from printed material, are arriving at an increased pace and all reference "the shallows". Kaitlyn is hesitant to share them with her boyfriend, let alone the police, but the letters have her hands shaking when they appear. Who could know about Kaitlyn's past, the shallows, and an REO Speedwagon song she will never play.

The narrative is told through three different points of view, the stalker, Kaitlyn, and Rodney, a police detective. The novel also includes a subplot about a serial killer operating in Philadelphia. As a DJ, Bradley has an insider's view and information about Kaitlyn's job, which adds realism to the details in the novel. While I was interested in the plot throughout the story, I did figure out who was the stalker and who was likely the serial killer. This didn't detract from following the story, but it did lessen the tension. I kept reading hoping to get some of the various details presented in the plot that were never fully explained. Some of the details are revealed, some are underwhelming, and some were never really broached again. Character development was adequate - nothing special.

I was put off by the stalker dropping cigarette butts everywhere, even to the point of leaving piles of them. Really? You are trying to be secret and you do that? For all the other care taken that seemed incongruous. While there were a couple other incidences that seemed inconsistent with facts and known procedures, there were also several heart-stopping moments and shocking surprises. In the end Dead Air was an engaging novel with some uneven writing and plot development.

Disclosure: My review copy was courtesy of CamCat Publishing via Edelweiss.
Posted by Lori L at 2:15 PM