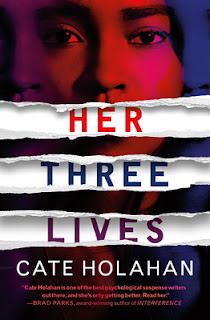 Her Three Lives by Cate Holahan is a highly recommended domestic thriller.

Greg Hamlin, 52 years-old is waiting for his pregnant fiancée, Jade Thompson, 32 years-old, to get ready for a party they have to attend when a home invasion leaves him with a traumatic brain injury. After he emerges from a coma, he learns Jade was beaten, loss their baby, and had her engagement ring stolen. At the hospital, Greg's soon-to-be ex-wife, Leah, and his children, Violet, 23 years-old, and college-aged son Paul clearly are united against Jade, although they met after Greg left and filed for divorce. Jade loves Greg and is determined to stay with him as he recovers in their new home.

To ensure their safety, Greg buys a home security system with a plethora of cameras. Both Jade and Greg are nervous about why they were targeted for the brutal attack. As the police investigate, Greg begins to watch Jade's every move on the security cameras and track her whereabouts. Jade is wondering what Greg may have known about their attackers or if something from her past is the cause of the invasion. Both Greg and Jade are tense, with Greg's PTSD making him increasingly paranoid.

Chapters alternate between the point-of-view of Greg and Jade. You will know that Jade really does love Greg, and, although she has kept secrets from him, she is trying to protect him during his recovery. It is also clear that Greg is becoming increasingly paranoid and mistrustful. Progressively, he becomes a malignant character. The trust between the two is totally broken. Actually, I increasingly began to ask myself why did Jade stay with Greg. I understand she loves him, but most people would have reached a breaking point. The actions of both characters increasingly became far-fetched and implausible.

The writing is good and keeps the drama moving along as more and more information is provided and the alternating thoughts and actions of the two characters are juxtaposed. Although the lead up to the denouement is predictable, reaching the conclusion is where the enjoyment is found in this domestic thriller.

Disclosure: My review copy was courtesy of Grand Central Publishing in exchange for my honest opinion.