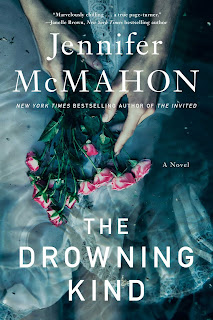 The Drowning Kind by Jennifer McMahon is a very highly recommended supernatural thriller.

For the last year Jackie (Jax) Metcalf has distanced herself from her sister Lexie. Lexie, who always overshadowed Jax when they were growing up, began to exhibit symptoms of schizoaffective disorder bipolar type as a teen. Now, as an adult, when Jackie received nine missed calls from Lexie, she assumes Lexie is off her medication again. Jackie purposefully left for the opposite coast to attend college and lives there working as a social worker/counselor. Lexie stayed at the family's house, Sparrow Crest, in Brandenburg, Vermont, which she inherited it from her grandmother.

The next day Jackie learns that Lexie is dead. She drowned in the pool at Sparrow Crest. The pool, which collects water from a mineral spring, is purported to have healing powers and grants wishes, but it is also said to extract a price and takes as well as gives. Jackie knows that there are rumors about the deep, dark pool and there is a history of people drowning in it. When Jackie/Jax arrives at Sparrow Crest, she learns that Lexie was researching the history of their family, the property, and especially the pool. It seems the pool is darker in more than one way.

An alternate story line is set decades earlier and follows Ethel Monroe, 37. She and her husband, Will, first visited the springs in 1929 when a resort hotel was built on the site and Ethel made a wish at the pool. She wished for a baby and made good friends with the wife of the owner. When Ethel learns she is pregnant, she and Will are overjoyed, but she later suspects the dark side of the springs, which gives her nightmares. Soon she and her family are more tied to the springs than she would like.

This is a deliciously atmospheric, creepy novel. McMahon does an excellent job creating the ominous atmosphere and sense of foreboding, much of it is with suggestions and rumors, with strange occurrences and things glimpsed out of the corner of your eye or late at night. Certainly everyone has thought they saw something, a brief flash, out of the corner of their eye and then doubted if they really saw something or not. McMahon takes these eerie sensations and suggestions and adds the rumors and legends surrounding the mineral springs and the pool to create an increasingly oppressive and menacing atmosphere in The Drowning Kind.

Ethel Monroe tells part of the earlier story of the springs, while the present day narrative is told through Jackie's point-of-view. The narrative in both timelines is equally interesting and compelling. The horror isn't overt, but builds gradually, as more and more information is slowly shared by both Jackie and Ethel. Both of these characters are well developed. They are also sensitive and vulnerable. The sense of danger increases as the frightening warnings and mysterious events add up in both timelines. The slow build and incredible descriptions of unexplained occurrences add up to an intense portentous mood and atmosphere. This gradual escalation of tension makes the ending even more shocking and dark.  Don't read this one by any pool of water


Disclosure: My review copy was courtesy of Simon & Schuster
Posted by Lori L at 3:26 PM