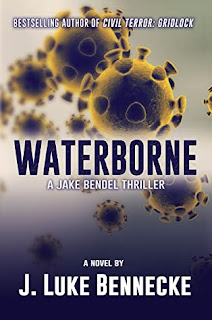 Waterborne by J. Luke Bennecke is a recommended action/thriller set in the near future and the second novel in the series featuring Jake Bendel.

Jake Bendel with a team of experts has invented a desalination system that will radically innovate the availability of clean, safe water for Californians. The system is powered by environmentally friendly molten salt reactors and once complete the project will consist of five plants running, making ocean water safe to drink. Water will never be a problem for California again. Jake and his team are behind schedule, but are working hard to get the whole system up and running.

In the back of Jake's mind is always the fact that Viktor, a vicious criminal featured in the first book, is still out there, wishing him harm. He is right to be concerned because Viktor does have nefarious plans and eliminating Jake is part of it. Simultaneously, someone has released an unknown virus into the water system, weaponizing the water, and Viktor is the prime suspect. Jake works with the FBI to uncover who is responsible and stop them before all of California is infected, while at the same time Jake needs to watch out for his own safety.


The premise of Waterborne is thought-provoking and the idea of someone weaponizing the water supply is always frightening, which makes it exciting escapism. The premise of the novel and the details require you to suspend disbelief, go with the flow of the action-movie plot, and avoid asking any questions about details. An attack by drone is one of the exciting chase scenes, although it was handled a bit too easily. There is information provided about the plot in the first novel, but I still felt as if I was missing some important details and information by starting with the second book. Also the writing felt off to me. It was as if in all the descriptions of people and places Bennecke tried a bit too hard to be trendy and cool. The character development is also light, but often this doesn't matter in a thriller where the action is the main event. This was previously published as Civil Terror: Waterborne; the first book is Civil Terror: Gridlock.
Disclosure: My review copy was courtesy of Black Rose Writing in exchange for my honest opinion.
Posted by Lori L at 11:02 AM