North by Shakespeare: A Rogue Scholar's Quest for the Truth Behind the Bard's Work by Michael Blanding
3/30/21; 480 pages
Hachette Books 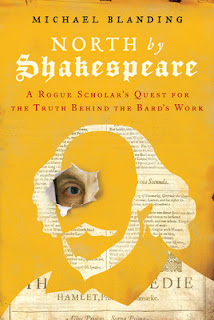 North by Shakespeare: A Rogue Scholar's Quest for the Truth Behind the Bard's Work by Michael Blanding is a very highly recommended, and apparently controversial, examination of who may have inspired Shakespeare in the writing of his plays.

This is a very interesting investigation that summarizes Dennis McCarthy's close scrutiny of the works of William Shakespeare compared to the life and works of Sir Thomas North. "McCarthy’s contention, that Shakespeare borrowed his material from Thomas North - a gentleman and scholar who moved in the uppermost levels of Queen Elizabeth’s court - provides an intriguing and wholly original solution, in which the playwright could have legitimately put his own name on his rewritten plays, at the same time borrowing their essence from someone who fit all of the requirements for writing them. In addition to being a translator, North was a lawyer, soldier, diplomat, and courtier - a sixteenth-century Zelig who participated in some of the most crucial events of the age, and brushed shoulders with the brightest minds of the Renaissance"

Dennis McCarthy is a self-taught Shakespeare researcher who has relentlessly worked on his theory and looked into the true origins of Shakespeare’s works for fifteen years. He uses plagiarism software and has found links between the plays and North's published and unpublished writings. At the end of the narrative in Appendix B, Blanding includes a section showing examples of McCarthy’s "techniques for using plagiarism software to explore parallel passages between Thomas North’s prose translations and William Shakespeare’s plays."


North by Shakespeare is a summary, but it is also a dense book and not a leisurely read. To cover the theory McCarthy sets forth, Blanding tackles topics that could fill several volumes, but manages to succinctly organize and integrate Shakespearean literary criticism, Elizabethan history, a modern-day travelogue, and McCarthy's research into a fascinating and compelling presentation of the theory that Shakespeare based his plays on the work and life of Sir Thomas North. Included is Appendix A, which " includes Dennis McCarthy’s estimated chronology of Thomas North’s plays versus the conventional chronology proposed by the Shakespeare Birthplace Trust," Appendix B, the example of using plagiarism software, a bibliography, and notes.

I found this whole theory and the presentation of it engrossing and was irresistibly pulled into the intriguing investigation McCarthy sets forth. I am not a Shakespearean scholar and, although I know about several of them, I haven't closely followed any of the various conspiracy theories over the years about who wrote Shakespeare's plays. They will always be by Shakespeare, even if he was inspired by or freely rewrote the work of someone else. At this point it is an interesting historical exploration of how he came to write so knowledgeably about places and experiences he would not have had access to or experience with in his life.


Disclosure: My review copy was courtesy of Hachette Books in exchange for my honest opinion.
Posted by Lori L at 11:46 AM