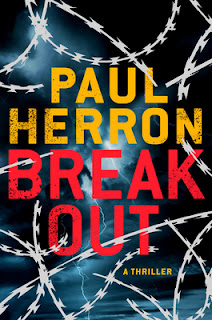 Breakout by Paul Herron is a highly recommended volatile and violent debut thriller.

Former police officer Jack Constantine is serving time at Ravenhill Correctional Facility located outside Miami, Florida, for killing one of the men who murdered his wife. A hurricane is approaching and work groups are sent from the prison to the Glasshouse, the former prison which is currently closed. The groups are ordered to clean up the building in preparation of sending prisoners over there due to flooding in the prison. While there Jack sees someone he doesn't want to see, Malcolm Kincaid, a man he sent to prison in an unethical manner. Later he sees the other two men who killed his wife. Before he can process all of this, everything changes. The single large hurricane is suddenly turning into the unthinkable. Two Category 5 hurricanes are coming together to form one monster superstorm. If that isn't enough, all the corrections officers flee for their own safety, leaving all the inmates to fend for themselves... and one of them opens up all the prison doors.

Jack teams up with Kiera Sawyer, a Correctional Officer who was there for her first day and was left behind. The plan is for the two to make their way to the Glasshouse where they might have a chance to survive, but to get there they have to fight their way through eight hundred inmates out to settle scores and the hurricane which is flooding and beginning to destroy the building.

This is a heart-stopping thriller that you will read at a gallop because the action is non-stop. The opening pages cover the murder of Jack's wife and things just get more intense after that. Between the inmates loose and running amok, and the violent weather there is no escaping from the violence, foreboding atmosphere, and numerous perils that threaten Jack and Sawyer. The tension is there right from the start and only increases to an almost impossible level of nail-biting suspense. This is one of those novels where the character development doesn't matter, although Herron does a good job providing some, because the actual plot is so intense. Breakout begs to be made into an action movie.

Disclosure: My review copy was courtesy of Grand Central Publishing in exchange for my honest opinion.