A Dark, Divided Self 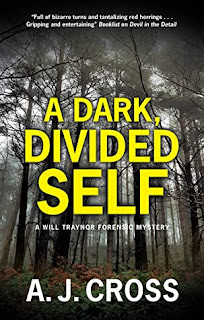 A Dark, Divided Self  by A.J. Cross is a recommended procedural and the third book in the Will Traynor series.

The decomposed remains of a young woman are found in a wooded area outside Birmingham. The victim is identified as 21-year-old Amy Peters. She disappeared three years ago and is one of five young women who have recently vanished from Manchester. Criminologist Will Traynor is called in by Detective Chief Inspector Bernard Watts to assist in the investigation. This is a killer who felt comfortable enough about his abilities to transport the victim on an eighty-mile journey from Manchester to Birmingham. Dr. Julian Devenish, a forensic psychologist, also joins the team.

This is procedural that sets a deliberate pace from the start which makes for a rather slow-moving plot. As a third novel in a series, this could be read as a standalone, but perhaps reading the first two would give you a greater investment in the series and this installment. There are several long discussions concerning profiling the kind of person who would commit these crimes that also slow down the pace. As a procedural, the novel does follow the investigation and clues closely, but it is light on character development. This is a well written procedural but it does have issues with the slow pacing and there is no real sense of suspense or tension as the investigation unfolds. I guessed the perpetrator early on.

Disclosure: My review copy was courtesy of Severn House via NetGalley.