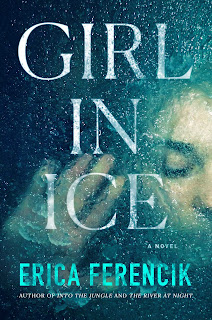 Girl in Ice by Erica Ferencik is a very highly recommended science fiction mystery set in the near future.

Valerie “Val” Chesterfield is a linguist who specializes in dead Nordic languages. She also suffers from life long anxiety issues, panic disorder, and has recently started drinking more after the death of her twin brother, Andy. She and her father were told that Andy committed suicide by going outside unprotected into 50 degree below zero weather at the Arctic research station located on a remote island off Greenland’s coast where he worked. They both doubt this is the truth. When Val is contacted by Wyatt Speeks, Andy's fellow researcher in Greenland, Val hesitates to open the email. When she does, her first reaction is total disbelief.

Wyatt claims that a young girl, 8 or 9 years-old, who was frozen in the ice has been thawed out alive. She is speaking a language no one understands and he sends Val a recording of the girl talking. Wyatt wants Val to travel to the research station to meet this girl and try to figure out what she is saying. None of this is in Val's comfort zone, but she ventures to the Arctic to attempt to decipher what the girl is saying, while also trying to uncover more information about Andy's death.

Val is a vulnerable, sympathetic main character and the fear and panic she has to overcome is palpable. All of the small cast of characters are depicted as realistic and believable with compelling backstories. Sigrid, the name given to the girl, is a unique characters and following the burgeoning relationship between her and Val as they try to communicate is fascinating. Raj and Nora are researchers who arrived at the station with Val and provide a counterpoint to Wyatt and Jeanne. Jeanne is the mechanic, cook, and assistant. Wyatt is an enigma, sometimes menacing, who is clearly hiding something and most certainly has a ulterior motive.

Greenland and the unforgiving, harsh environment is a place, but also takes on the importance of another character. I quite enjoyed placing this group of people in this context. Having these characters in such an isolated setting  is akin to having a small group of explorers anywhere, including a future space mission. That isolation and the harsh environment coupled with Sigrid and the mystery behind her all work to give Girl in Ice the feeling of a science fiction novel that contains several mysteries that need to be solved.

The writing is excellent and the plot is engrossing. Girl in Ice had me captivated from beginning to end. The action does move slowly at the start, but it serves to is build up the atmosphere, tension, and deepen the mysteries while simultaneously providing important character development. The linguistic portions of the novel are fascinating. For me, this was an un-put-downable and unforgettable novel with a unique plot and characters. I need to look into Ferencik's other novels.

Disclosure: My review copy was courtesy of Gallery/Scout Press.