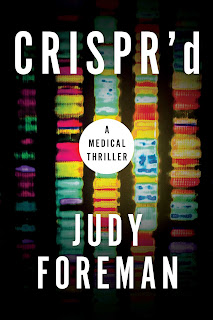 CRISPR'd by Judy Foreman is a so-so story of a journalist.

Opening with the start of a trial in January of 2020, we know the defendant, Boston geneticist Dr. Saul Kramer, tampered with the healthy embryos in three cases at an IVF clinic replacing a healthy gene with a deadly mutation. The babies born died horrible deaths at around a 1 to 1 1/2 years-old from a genetic disease called Niemann-Pick. The doctor at the clinic used the gene-editing technique called CRISPR, which stands for "Clustered Regularly Interspaced Short Palindromic Repeats." Sammie Fuller is a journalist who originally broke the case and is following the trial.

The narrative jumps back in time to 2018 and 2019 following Sammie's actions and investigations into other stories, not just the CRISPR case. (Two chapters are in 2015-16.) Once they suspect Dr. Kramer and a genetic defect, Sammie's husband just happens to be a molecular biologist at MIT so he can assist with the investigation. Sammie's story lead to the murder charges and subsequent trial. The whole reason for this novel is the argument that the defense uses.

Starting with the trial set up the premise that this was going to be a tense medical thriller. Regrettably, the novel wander off track and became more interested in Sammie's career, reducing it to the tale of a journalist's career before the big case. We are supposed to like Sammie, but she's a one dimensional character with little depth. The chapters on Dr. Kramer's actions provided a motive, but stopped there. I stuck it out, hoping for some connections, twists, information that would make it a thriller and live up to the initial opening chapter.

The writing was adequate, nothing special. There were several times in the novel where Foreman could have saved the plot and made it an actual thriller and instead went the opposite direction.  I finished the novel very disappointed. In the end this became less a medical thriller than a treatise on correct thought.

Disclosure: My review copy was courtesy of Skyhorse.