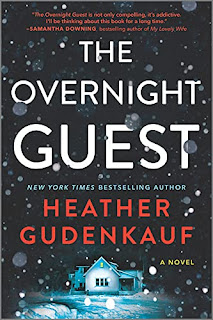 The Overnight Guest by Heather Gudenkauf is a very highly recommended chilling thriller.

Wylie Lark, a true crime writer, is writing her latest book about a murder in Burden, Iowa. She is staying at the farmhouse where two people were murdered and a little girl went missing in 2000. Now a major snowstorm with ice and snow has moved in, cutting her off from the world. When taking her dog out she is shocked to find a child outside laying on her driveway in the snow. She brings the bleeding child inside to warm up and to care for his injuries. The young boy won't speak and appears to have experienced some trauma and abuse.

The storm has made contacting the sheriff impossible so Wylie braves the outdoors again, finding a truck in the ditch, and an injured woman. She leaves her coat with the woman, promising to return with a way to help her get back to the house. However, when she returns, the woman is gone and Wylie can only hope the woman makes her way to the house. In the meanwhile she needs to keep the fire going for warmth while trying to care for a child who refuses to talk.

This masterfully written, well-plotted novel follows three different narrative threads. The main story line is in the present day with Wylie trying to care for the child in the raging blizzard. The second is the story of the murders that occurred in Burden, Iowa, in 2000. The third occurs during an unspecified time and is told through a young girl's point-of-view. The three story lines feature characters with distinctive voices and point-of-views. They are developed as distinctive individuals reflecting their different ages and circumstances.

All three narratives are equally compelling, suspenseful, and riveting. They eventually converge in an unpredictable denouement that I found extremely satisfying after all the tension and anxiety present throughout the novel. The enjoyment is found in the excellent, engrossing, and absolutely gripping journey to reach the ending. 4.5 rounded up

Disclosure: My review copy was courtesy of Park Row Books.
Posted by Lori L at 2:24 PM