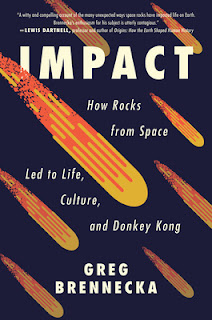 Impact: How Rocks from Space Led to Life, Culture, and Donkey Kong by Greg Brennecka is a highly recommended, humorous, approachable examination of how meteorites have influenced us from the formation of our planet to the development of human culture.

Brennecka, a cosmochemist at Lawrence Livermore National Laboratory, shares stories and facts that will entertain and inform readers about the most important rocks on Earth. Starting with the formation of the universe, he presents how, by transforming the early atmosphere and potentially delivering the complex organic molecules needed for life, the constant assault by meteorites is what has made Earth the planet we all live on today. Of course this change also includes killing off the dinosaurs. Meteorites have influenced and terrified humanity while influencing culture since the start of civilization. Brennecka covers the numerous ways meteorites have become part of our culture.

The text is written in a very accessible, humorous style. Included are numerous cartoon illustrations of various scientific concepts and photographs of historical meteorites and artifacts. The writing style will make it suitable for popular science readers of all levels of expertise. There is an appendix with more technical information for advanced readers. It is safe to say that those with a greater scientific background will want to look elsewhere for a more complex and thorough scientific examination of meteorites, however this is a fine choice for those who are new to the study of meteorites and would enjoy the humorous presentation.