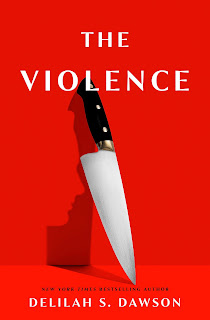 The Violence by Delilah S. Dawson is a highly recommended novel about a near-future epidemic of violence.

Chelsea Martin has two daughters Ella (17) and Brooklyn (5), a beautiful home, and a physically and emotionally abusive husband. Chelsea must follow a carefully premeditated set of actions every night in order to hopefully avoid David's anger and punishment if everything doesn't go exactly as he wants it to. Even worse, David has also punished Ella and Brooke is having nightmares. Chelsea is isolated with no support system. Even her wealthy mother, Patricia, offers just judgment and no support. Chelsea needs to find a way to protect herself and her girls. That is when the Violence erupts and begins to disperse across the country.

The Violence is a condition that is spreading across the country, especially in warm, southern climates. There are videos showing when it takes over someone and they experience sudden, explosive, violent bursts of rage, called "storms" attacking and killing anyone in their path. It is said to spread through mosquito bites, so those who can are traveling to colder climates. There is also a vaccine out that only the wealthy can afford at $30,000 a dose. There are now hot lines to report anyone suspected of having the Violence and they will be removed and imprisoned. This gives Chelsea an idea of how she can escape.

This is an un-put-down-able apocalyptic near future science fiction horror novel that will keep you glued to the pages to see what will happen next. Obviously, a novel about a woman in an abusive marriage and a pandemic that causes people to erupt in random acts of violent rage is going to have some graphic violence so take note of that. Some of the scenes are very, very graphic. However, the plot is about so much more than the Violence. It melds the science fiction aspects with a novel about mothers and daughters escaping, bonding, finding safety, and their place in the world. The pages flew by while I was reading. This would truly be one of the best novels I've read this year (if only some editing were done, which is covered later).

Wonderful character development occurs as three generations of women experience hardship, growth, changes, and discover their innate worth and power. The characters you first meet in the narrative are transformed by the end and you follow along as this growth transpires. Chapters alternate between the point-of-view of Chelsea, Ella, and Patricia so we can intimately follow each of them as they struggle to survive, and hopefully thrive, in a very changed world.

This is a plea I have made to authors repeatedly in reviews. Please entertain your readers with a great story and leave your feelings about current political/social events out of a speculative science fiction novel. Don't let us know your views about current politics - which all have an expiration date - and give your novel some longevity. Certainly these problems in The Violence are due to the fact that the novel was written several months ago and numerous facts and events have occurred in the interim. It was fine to mention this pandemic, the Violence, followed several years after Covid (which is still going on), but not repeatedly, and leave dates out. Even more distracting/annoying was Dawson's almost verbatim insertion of the same current political sentiment over 5 times (after which I stopped counting) into the novel. Regrettably, these flaws require me to subtract a star on an otherwise engaging and compelling novel.

Disclosure: My review copy was courtesy of Random House.