Nothing Left To Lose 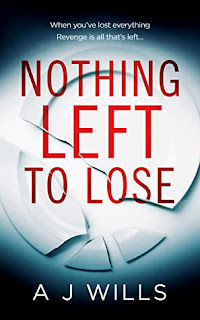 Nothing Left To Lose by A.J. Wills is a highly recommended psychological thriller.

Abi is a criminal lawyer/barrister who just secured the convictions of two murders. Henry and Abi should be celebrating the conclusion of her big case, but Henry is frantic that she isn't home and her phone is off. When Abi finally returns after celebrating with colleagues, and says that someone was following her. Later Henry sees that someone did follow Abi home and now knows where they live. The next day he discovers her car was vandalized, and the couple  receives an anonymous letter with a death threat. Henry is worried that these threats are tied to her recent case and the crime family involved will extract revenge on their family. Abi is not as concerned, but ends up talking to the police about the incidents while Henry looks into a home security system.

Henry's concerns escalate and his paranoia increases with each new incident as he tires to figure out exactly who is targeting his family. Make no mistake, someone is out to get them and becoming increasingly threatening and bold in their contact and threats. Henry really has no idea who is behind this so his mind is skittering from one suspect to another. Henry's reactions are manic at times and almost over-the-top, which detracts from the seriousness, especially when he is not taking all the contact and threats he receives to the police. Document, document, document...

Nothing Left To Lose will hold your attention to the end as the threats increase. Basically, all of the characters are unlikable so the strength to the narrative is in piecing together if the threats are real and who could be responsible for them. New suspects emerge as the information Henry thinks he has changes throughout the plot. The final denouement is very satisfying, but I'm going to have to admit I almost set this novel aside based on the sheer exasperation and irritation I felt toward the character of Henry.

Disclosure: My review copy was courtesy of Cherry Tree Publishing
Posted by Lori L at 12:06 PM