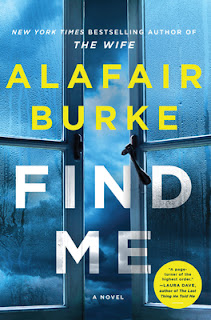 Find Me by Alafair Burke is a highly recommended mystery.

Hope Miller doesn't really know her real name. She experienced amnesia fifteen years ago after she was found unconscious by an overturned SUV and she never regained her memory. Hope Miller is the name she gave herself. The town of Hopewell, New Jersey, where she has lived, banded together and has taken care of her. Lindsay Kelly, Manhattan defense lawyer and Hope's best friend, has been supportive of her since she was found. Now Hope is excited because she has made a decision to try and live in East Hampton, Long Island, an unfamiliar town where she is not known and knows no one. Lindsay is supportive, but concerned, and her concerns were warranted when Hope disappears.

Some blood is found at her last known location, but it's not her blood. Local police officer, Carter Decker, but he is skeptical about Hope and thinks she is a scam artists. Carter's doubt increases when a local man is found dead and he may have a connection to Hope. Then, it is determined that the DNA sample has a connection to the case of a Wichita, Kansas serial killer twenty years earlier. In her search for the truth about where Hope went, Lindsay calls NYPD homicide detective Ellie Hatcher, who is well acquainted with the case in Kansas.

The characters, and there are several that you need to keep track of, are all interesting and appealing.  Although this novel has Ellie Hatcher as a character it is a standalone novel and not necessarily part of the Ellie Hatcher series. Lindsay and Hope are the central characters here, but Ellie has a lot of information and insight into the case. The characters all bring with them another mystery or a facet of one.

Find Me is well written and the mystery is interesting. The narrative presents a tense, suspenseful, and compelling mystery that follows several twists while uncovering secrets and finding new information. There is a whole lot going on in this tangled case of a missing woman and you will become invested in finding Hope while uncovering what happened. The plot is engaging and most readers will quickly become involved and interested in the questions that arise.


Disclosure: My review copy was courtesy of HarperCollins.
Posted by Lori L at 2:49 PM