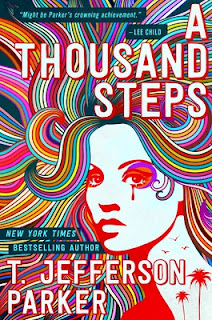 A Thousand Steps by T. Jefferson Parker is a very highly recommended coming-of-age story wrapped around a mystery set in a very specific time and place. This is really a compelling, extraordinary, excellent novel!

In 1968 Laguna Beach, California, is attracting members of the developing counterculture - hippies, protests, sit-ins, drugs, and free love. Matt Anthony is a broke sixteen-year-old who is just trying to survive. He has a paper route that he needs to buy food. His mom is neglectful and an addict. Drugs are readily available and she is becoming part of the counterculture. His dad is gone and is only occasionally in contact. His brother is over in Vietnam and will hopefully be returning home soon.  But Matt is mostly worried about his sister, Jasmine (Jazz). She has just graduated from high school and hasn't returned home.

A girl they both knew has turned up dead on a beach, so Matt is worried about his missing sister and sets out trying to find Jazz. When there is still no sign of Jazz after 48 hours, Matt and his mom talk to the police about it. They assume she is a runaway and are much more concerned about the hippies and the drug problem over running the city. Matt takes it upon himself to search for Jazz as his mother is too stoned to do it. He tirelessly searches for Jazz while making sure he does his paper route.

The social and cultural divisions between characters is clear. In the pretense of helping Matt make money so he can eat, many of the adults are using him for their own nefarious purposes. They knew he was struggling and could have just gave him the money or bought him a meal.

Matt is a good kid. He is a sympathetic and thoughtful young man who is raising himself, which is heartbreaking and tragic. While his mother is off doing her own selfish thing, Matt is in a constant battle to obtain food or money for food, while looking for his sister. During this time, he has his first girlfriend, a girl he has had a crush on since fourth grade. He is also a talented artist and does sketches of the people he encounters. Matt is a memorable character involved in an overwhelming situation, both facets work together to make A Thousand Steps an unforgettable novel.

It is mostly a coming-of-age story, but it is also a mystery and a historical novel set in a very specific time and place. The time period adds insight into the actions of the characters and the atmosphere in Laguna Beach in 1968. This is when Timothy Leary was encouraging people to, "Turn on, tune in, drop out," use LSD, smoke hash, use opium.

The writing is exceptional and I am surprised I have never read anything by T. Jefferson Parker before this. A Thousand Steps is hard to put down once you start reading this intriguing and riveting novel. The plot seems simple, a young man is searching for his sister, but there are so many other parts to the story that give it depth and interest. A Thousand Steps will certainly be one of the best novels of 2022.

Disclosure: My review copy was courtesy of Tor/Forge Books.