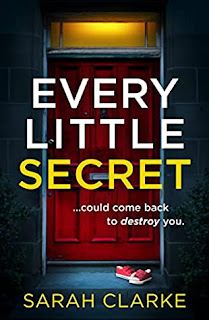 Every Little Secret by Sarah Clarke is a recommended domestic drama.

Grace, Marcus and Kaia, their seven-year-old daughter are a happy family. Sure, there are some adjustments to make with recent changes, but they are all settling into life back in the UK after living in New Zealand. When Marcus and Kaia are climbing a tree and she falls, it is terrifying. When Kaia tells the doctor that her dad pushed her out of the tree, Grace finds it inconceivable. The doctor does admit that it could be due to the concussion Kaia has, which can cause confusion. Grace holds onto this thought knowing Marcus would never hurt Kaia, but the doubts are still there, lingering just under the surface, especially when Kaia is exhibiting other behavioral issues. Kaia continues to blame Marcus for hurting her in other incidents too.

The narrative is told through multiple points-of-view and follows two timelines, Marcus in 2005 and Grace in 2019. Grace is the primary narrator, especially in 2019, as is Marcus in 2005. The perspective of Coco, a friend of Grace, and Kaia are also shared. We know that Grace and Marcus have a big secret they are keeping hidden. We know that back in 2005 Marcus, a friend of Grace's brother, Josh, was attracted to Coco. So, basically, we know Kaia is accusing Marcus of hurting her, there are some long held secrets that obviously goes back in time, Grace wants to support Kaia and secretly has doubts about Marcus, and Grace has many doubts and fears about the truth of the long-held secret coming out. This information is presented in a drawn-out, tedious fashion.

Every Little Secret unfolds like a day time melodrama, with an increasing number of theatrical turns. After a promising start, the plot development began to deteriorate. (For example, early in the novel, instead of hand wringing and worry about the secret, why not take Kaia to see someone immediately once she started acting out and accusing her father of hurting her?) I understand that this would infringe on the tension being built in the contrasting action between the two timelines.

Perhaps it was the obvious build up to make this drama into a psychological thriller, but I began to lose interest in all the drama and just wanted to know what the secret was that would be so devastating if it was revealed.  Admittedly I did not connect to or care about any of these characters. Every Little Secret is a recommended novel with the caveat that some readers will connect with it more than others.