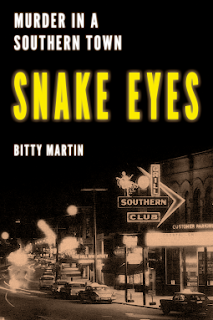 In the summer of 1966 13-year-old Cathie Ward was killed while horseback riding at Blacksnake Ranch, located just outside of Hot Springs, Arkansas. Frank Davis, the 42-year-old owner of the ranch, claimed her death was an accident that happened when her foot caught in a stirrup and she was dragged. Even so, the town was rife with rumors and doubts about the veracity of Davis's claims. Doubts turned to certainty when in January of 1967 Davis stalked and gunned down his young fourth wife Sharron Knight Davis, killing her and wounding her mother. Sharron, who had recently left him, had left behind a letter implicating him in Cathie's death. Davis was indicted for both murders. He was sentenced to death for killing his wife, but the charges for Cathie's case were dismissed. Davis's sentence was later commuted to life. He was paroled in 1984.

This debut true crime is written by an author who knew the case, the town, and those involved. Bitty Martin was a friend of Cathie, so this case has been on her mind for years. It is one that shaped her childhood. Even if adults were trying to keep quiet around their children, kids always hear and know more than adults realize and that certainly applies to Martin and other friends of Cathie. She and her hometown friends had collected information about the case and had been following it for years. As someone who was well acquainted with the town and many of the residents, Martin had an insiders view of how the murders affected the whole area.

This well written and documented narrative features personal interviews, recollections, and stories, crime scene records, court documents, and Davis’ own prison files. Snake Eyes: Murder in A Southern Town includes an appendix, and sections on source interviews, source documents and notes. True crime aficionados will appreciate the nuanced details presented in this true crime tale. Those with ties to the area will likely have a greater interest in the complete story than casual readers.

Disclosure: My review copy was courtesy of Prometheus Books.