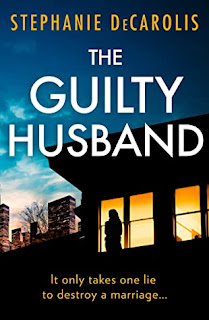 The Guilty Husband by Stephanie DeCarolis is a highly recommended mystery.

Vince Taylor is the CEO of the technology company, Kitztech, located in NYC. When Layla, an intern at the company is found dead and the police question her co-workers, Vince initially denies knowing her well. Soon after this, after talking to his lawyer, he has to admit to police that he was having an affair with her, especially when a salacious news story comes out about his affair that same day. This also means that he has to confess to his wife, Nicole, that he was having an affair, and it also means that news reporters are hovering around them. Through it all Vince adamantly denies murdering Layla, but he is the prime suspect.

This is a well-written and entertaining read that moves along at a quick pace. The chapters are largely told through the point-of-view of Vince or Allison, the lead detective on the murder case. The voices of Layla and Nicole also jump into the mix. All the characters are flawed but believable. Everyone has told lies and has secrets and many of these are gradually exposed. There are numerous elements of suspense and tension throughout which keep the pages flying by, especially as new information is revealed. Perhaps it depends upon how many mysteries you read, but some readers will certainly know the twist ahead of time. This won't hamper the enjoyment of watching it unfold.