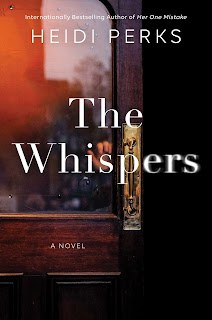 The Whispers by Heidi Perks is a highly recommended psychological suspense.

Since they were five-years-old Anna and Grace were just like sisters until Grace's family moved to Australia when they were seventeen. Now nineteen years later Grace and her daughter have moved back to Clearwater, England. Grace is ready for her best friend to embrace her return, but Anna already has a set of close friends and is reluctant to have Grace join their group. When Anna goes missing one night after a girls' night out at the pub, Grace seems to be the only one who is concerned. She is the one who contacts the police and becomes more frantic as the days pass.

The novel opens with a body discovered on the beach, so part of the suspense is discovering who died and why. The narrative flips between Grace in the present day and Anna months in the past leading up the final denouement, with insertions of whispering gossip from other parents meeting during the neighborhood school drop off/pick up. The plot moves at a slow and steady pace, however there is some repetition in the middle that will have some readers skimming ahead to new action.

The writing is suspenseful enough to hold your attention while slowly making it clear that everything may not be quite as clear as it seems. The tension increases as more information about the past of both Anna and Grace is uncovered and disclosed. This is more a novel of suspense rather than a thriller or mystery.

Basically, The Whispers is a novel about a very toxic friendship. It is also a novel full of unlikable characters, most of which are depicted as caricatures rather than realistic people. What will keep you reading is discovering who was found on the beach and untangling all the lies in search of the truth. And all of the characters are lying or hiding something. 3.5 rounded up.

Disclosure: My review copy was courtesy of Gallery Books.