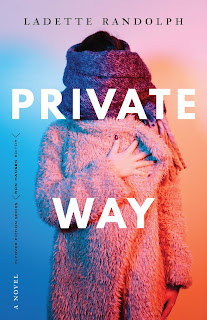 Private Way by Ladette Randolph is a so-so tale of a woman who needs to take a break from the internet.

Vivi Marx started the online community Pie, which became very successful, but with the success came conflicts. Events led to Vivi being cyberbullied and doxxed, which has brought fear and anxiety to her life. For her own mental health and safety she decides to de-grid, leaving her life, her phone, and laptop in L.A., and heads to Lincoln, Nebraska, where she had spent several summers with her grandmother who is now deceased. Vivi rents a small house for a year and meets her new neighbors on Fieldcrest Drive.

There are parts of the novel where the writing is wonderfully descriptive, but the numerous problems with the plot and the flow of the novel take away from the descriptive writing that can be quite nice. Concerning the plot, events in the story line that are left unresolved became a distraction. Additionally, I really didn't care for the fact that we are told the story rather than having the action flow as an integral part of the plot.

Initially, I found Vivi an unappealing character and this first impression never changed. I struggled throughout the novel to keep an open mind and try to connect with this character. There was also a disconnect with the way Vivi acts/talks and her age.

Perhaps I should have left this novel as a "did not finish" because it never won me back after a few questions arose early on. Perhaps it's being nick-picky, but what is the deal about it taking 5 days to get to Lincoln, even after buying an atlas in Elko, NV (when you would be on I-80). Even daydreaming, at that point the interstate takes you most of the way with efficiency and ease. Then when Vivi is crossing the Missouri (and wondering about its depth) to get on I-80 toward Nebraska, I was shaking my head. She would have had to cross the river somewhere else in order to even approach Lincoln from the east. And then there is the ghost.


Disclosure: My review copy was courtesy of the publisher.
Posted by Lori L at 11:28 AM