The Far Land: 200 Years of Murder, Mania, and Mutiny in the South Pacific by Brandon Presser
3/8/22; 352 pages
PublicAffairs Books 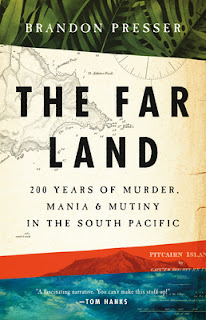 The Far Land: 200 Years of Murder, Mania, and Mutiny in the South Pacific by Brandon Presser is a very highly recommended reexamination of the story of the HMS Bounty mutineers and their Tahitian companions.

In 1790 the mutineers of the HMS Bounty settled on the South Pacific island of Pitcairn. In 1808, an American merchant ship came upon the uncharted island in the South Pacific. "Seven generations later, the island’s diabolical past still looms over its 48 residents; descendants of the original mutineers, marooned like modern castaways. Only a rusty cargo ship connects Pitcairn with the rest of the world, just four times a year." In 2018, travel writer and author Brandon Presser took the freighter Pitcairn to live among the present day two clans on the island who are bound by circumstance and secrets. While on the island, he collected the details of Pitcairn’s full story.

The story of mutiny of the Bounty has been told through books and films numerous times. Presser makes it clear that the mutiny was only the prologue to the actual dramatic events that occurred on the island. The Far Land adds to the collection with both chapters focusing on the historical events and chapters told through a contemporary personal narrative. He recounts in detail the original mutiny and settling of Pitcairn and his 2018 visit to meet the islands 48 inhabitants. Most of the current residents are descendants of the mutineers.

Presser has visited over 130 countries and is an experienced travel writer who can look beyond the novelty of an experience and dig deeper into the real story behind the facade. He uncovers a tale of power, tribalism, obsession, paranoia, and betrayal. Presser does an excellent job presenting the exhaustive research he undertook. References and a select bibliography are included. This is a well-written, great choice for anyone interested in Pitcairn's history and its current inhabitants.

Disclosure: My review copy was courtesy of PublicAffairs Books
Posted by Lori L at 12:42 AM