The Night She Went Missing 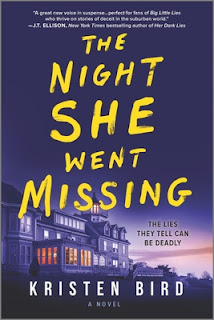 The Night She Went Missing by Kristen Bird is a recommended novel of domestic suspense.

Emily Callahan was missing for months when she is found unconscious by the water. She is hospitalized, stable, but discovered to be pregnant and still unconscious, although she is mentally aware of her situation. The Callahan family name represents the prominent social class on the Island of Galveston, Texas, and Rosalyn Callahan, Emily's grandmother, is the grande dame. Emily’s family recently moved to Galveston for her senior year of high school after her mother, Catherine, was involved in a scandal. Catherine meets other mothers, Leslie, Rosalyn's right hand woman, and Morgan, mother to Alex who becomes Emily's best friend. When Emily went missing, Alex was a suspect, but then who was leaving threatening notes in Emily's locker? Could it be Anna, Leslie's daughter?

The narrative starts with Emily being found and we are privy to her inner thoughts, so we know she is going to be alright when she later disappears. Then the point-of-view alternates between the voice of Catherine, Leslie, Morgan, and Emily. Everyone is keeping secrets while holding resentment and suspicion toward others. Really, you wouldn't want to know any of these women. Emily, however, is depicted as almost too perfect to be a realistic eighteen-year-old.

While the plot starts out relatively strong, it soon descends into a brouhaha of privileged women/mothers behaving badly and doing what ever they can to protect their reputations and that of their children. In many ways this well tread path is what will keep you reading while trying to find out what happened to Emily. The final adventures of all these women on the way to the conclusion is a bit ridiculous and unbelievable. The enjoyment in this novel is found in viewing it as a bad movie as you keep track of all the players, and sometimes that is entertaining enough. Yet again, however, I would like to caution writers to keep their personal political/social views about current events to themselves as it dates and cheapens the novel.

Disclosure: My review copy was courtesy of MIRA Books.
Posted by Lori L at 12:28 PM