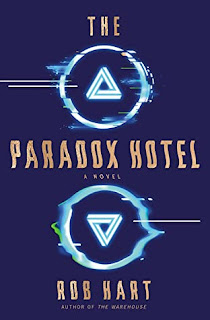 January Cole is the hard-bitten head of security for the Paradox Motel with an AI drone named Ruby as her constant companion. A former Time Cop, January is now Unstuck, a condition that resulted from entering the time stream too frequently which results in unexpected jumps ahead or back in time and will eventually be the cause of her death. She is still grieving over the accidental death of Mena, a waitress at the Paradox, but her brief glimpses of Mena during the day help keep her going. Now January's problem is keeping control over the wealthy clients staying at the Paradox, the only hotel adjoined to the Einstein Intercentury Timeport, and this job has just gotten more difficult.

A blizzard is rolling in, time travel destinations, flights, and transportation have been shut down and the ultra wealthy clients who can afford these luxuries are not happy and very demanding. Three raptors are running loose, clocks are jumping around in time, and electricity is flickering. Guests are demanding the best accommodations and unhappy when their demands aren't met. Time travel technology is about to be privatized and powerful people are present, wanting to stake their claim to it. But more concerning to January is the body in room 526, a body only she can apparently see, and a killer only she can catch.

This is an action-packed, detailed and complex adventure that moves at a rapid pace throughout. I enjoyed the melding of science fiction to a detective novel in a locked-room murder mystery plot. The Paradox Hotel does require your full attention while reading because Hart packed a whole lot of detail into the novel.

The large cast of characters can initially seem overwhelming, but they will sort themselves out as you read. January is an interesting, irresistible, and sometimes annoying main protagonist. She has an attitude. She is sarcastic, abrupt, insightful, funny, fearless, and vulnerable. She is also in a tense time-bending situation that only she can solve because she doesn't know who else she can trust or if she can even trust herself.

I loved Hart's The Warehouse but I didn't connect with The Paradox Hotel quite as much. I do think, yet again I need to caution an author to reign in their personal political/social views to a degree as it diminishes the novel, income inequality (the ultra wealthy vs. the rest of us) in this case. I am looking forward to Hart's next novel.