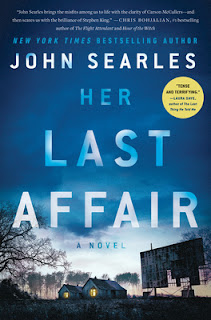 Her Last Affair by John Searles is a highly recommended novel of psychological suspense.

The novel unfolds through the point of view of three characters. Skyla Hull, a retired nurse in Rhode Island, was married to Hollis for almost fifty years until his accident the previous year. Now that macular degeneration has severely reduced her sight, her activity is limited so she spends much of her day mourning Hollis and ruminating about his long term affair. She decides to rent the cottage next door to a British man named Teddy Cornwell. Miles away in Florida, Linelle Durfort reconnects with her first love, Teddy Cornwell. In NYC, Jeremy Lichanel, a writer who is unhappy with his physical appearance, gets an assignment to review a restaurant in Providence and decides to look up an old friend who broke his heart years ago.

These desperate, heartbroken, and isolated characters are seeking retribution and closure, thinking their actions will provide them satisfaction, fulfillment, and love. As the three diverse, and atmospheric multiple narratives unfold, you will be waiting for the connection between these characters. The connection won't come right away, but when it does it will be in a meteoric twist that will entirely change the story from a complex study of forlorn, unhappy, and bitter characters to almost a horror novel. This is an intricate plot that requires attention to each narrative thread in order to fully comprehend and appreciate the intense cinematic denouement.

I have to admit, sheepishly, that while I was glued to the pages at the shocking end of the novel when everything was going down and coming together, I actually quit enjoyed the earlier character studies of these despondent, unlikable individuals a bit more than the chilling climax. Understandably, I'm likely alone in this feeling. The ending is compelling and shocking. It pulls together all three narratives and undeniably will hold your attention.