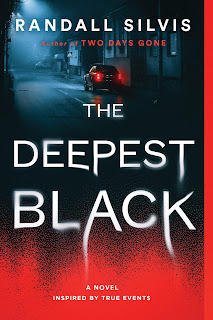 The Deepest Black by Randall Silvis is a very highly recommended metafiction true crime memoir where Silvis is the main character.

When Silvis can't come up with the idea for a new novel he just happens to meet a stranger at a buffet who tells him about a murder case in a nearby small town in Pennsylvania’s rural Mercer County. Thomas Kennaday tells him some vague details about a local mystery involving an abandoned baby and the shooting deaths of two adults and a child. Then he mentions a young woman who will have more details, Phoebe, a resident of the house where the shootings occurred. The problem is that she only reveals small portions of the story as dictated by Kennaday, and there is much more going on that is apparent in her comments. This sends Silvis on a quest to uncover what really happened and why Kennaday told him about it.

Written like a true crime story this odd genre bending novel follows the plot of a true crime novel and a mystery but also veers off into supernatural. Silvis is the main character and narrator. I may be an outlier, but I though it was not only totally engrossing, but un-put-downable. Sure there are references to various collusions, unknown sections of alphabet agencies, an abuse ring, inexplicable events, spirituality, UFOs, oppression, mind control, men in black, and more, but it all made sense within the narrative. I appreciated his honest opinions about events he is observing in the novel.

Obviously, this is a novel that will work brilliantly for some readers and not for others.

Disclosure: My review copy was courtesy of Poison Pen Press via NetGalley.
Posted by Lori L at 1:39 AM