A Ballad of Love and Glory 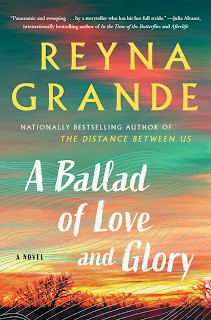 A Ballad of Love and Glory by Reyna Grande is a recommended historical fiction novel set in 1846 during the Mexican-American War.

After Ximena Salomé's husband is killed during the conflict, she becomes a nurse and takes her gift of healing to the front lines of the war over the disputed Río Grande boundary. At the same time, John Riley, an Irish immigrant who is serving in the U.S. Army, but he and his fellow Irish immigrants were treated cruelly by the officers. He deserts and joins the Mexican force where General Santa Anna places him in charge of the St. Patrick’s Battalion, a unit made up of other Irish deserters. He and Ximena meet and fall for each other, beginning an affair that is surely doomed from the start.

This is a literary fiction as well as historical fiction, so it is technically beautifully written but inspired by historical events and figures. The novel does focus on the battles and details of the war. The narrative unfolds through alternate points-of-view and also provides additional information through some flashbacks. It is a slow moving novel at times as it focuses on the details of the war. Additionally, with the focus on the history, there is also a lack of character development and they were hard to connect to while reading.

Obviously Grande takes some liberties while following the facts in order to take the events and historical figures and turn the information into a novel. Historical fiction isn't normally a genre I would chose to read due to the trend to take modern sensibilities and project them into a historical context. Historical context of the era and times matter to me. There is some of this contemporary editorializing present and prepare yourself for an unfavorable view of America.


Disclosure: My review copy was courtesy of Atria Books via Edelweiss.
Posted by Lori L at 11:53 AM